The proverbial question, ‘Which came first, the chicken or the egg?’ is easy to answer. Genesis indicates that God created a mature world ready to reproduce. Thus, it would seem God created chickens ready to lay their first eggs.

What Is So Special About an Egg?

The egg is a common enough part of most homes. In America each year we consume 71 billion eggs laid by 284 million hens. That’s 254 eggs/person. We crack them into a pan and think nothing of them. Yet, each egg is a marvel of creative genius.

Consider, for example, that the egg is one very large cell with all the basic parts of an animal cell. How does the hen surround this potential life with a calcium encasement (shell) so perfectly every time?

The shell contains 10,000 tiny pores that allow the developing chick to breathe, yet keep the liquids inside the shell from escaping. As the fertilized egg begins to develop, blood vessels grow out of the chick’s body. Two of these attach to the membrane under the eggshell and two attach to the yolk. By the fifth day, the tiny heart is pumping blood through the vessels. The nutrition in the yoke is the food for the chick, attained through that blood vessel. As the chick develops, it gives off water vapor and carbon dioxide. These could kill the chick before birth were it not for the other blood vessels carrying the wastes to the shell where they escape.

The Perfect Place for a Growing Chick 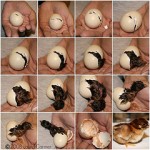 When you boil an egg, you probably notice that one end of the egg is flat, the only part that did not fill the shell. This is an air sack and contains approximately 6 hours of oxygen for the chick. By the 19th day, the chick is getting too large to sustain life on the oxygen obtained through the shell pores. By this time, the chick has grown an egg tooth on its beak. With this, the chick breaks through this air sack membrane and gets the fresh oxygen needed for its next task, breaking the shell and hatching on the 21st day. Oh, by the way, the chick just ‘happens’ to develop so the head is on the air-sack end every time.

Is Design Really That Obvious?

Is it not easy to see that each part of the egg is perfectly designed for the needs of the chick? The chick could not survive without all the parts being in place. With this and the thousands of other examples in nature, we must conclude that an all-wise God planned it that way from the beginning. And the same Lord said He cares for us infinitely more than he cares for the birds.

2 thoughts on “The Chicken Egg”