I have always felt that human reproduction is so complex and interrelated that it poses one of the most difficult problems to evolution. Both the physical and genetic differences and complements had to be in place from the beginning, for all living things. It is a sensitive subject to deal with in a public publication yet, by simply examining the facts, the processes involved in human reproduction cannot be honestly explained apart from design.

Am I Completely Unique?

Most people should know that each cell in a human being contains 46 chromosomes. If two of these united to make another person, that person would have 92 chromosomes and would not match other humans. Instead, both the male and female body produce reproductive half cells of 23 chromosomes each so that, when united in conception, they produce a new life that is genetically exactly half of each parent. Further, the new life can only start with the half cell from the female and the half cell from the male.

A fascinating article in the January edition of Acts and Facts (ICR), in my opinion, put yet another nail in evolution’s coffin. The article is entitled “Made in His Image: Human Reproduction” by Dr. Randy J. Guliuzza, and is available online. (http://www.icr.org/article/4314) Here are some quotes from the article, showing how symbiotic the male and female are in human reproduction. 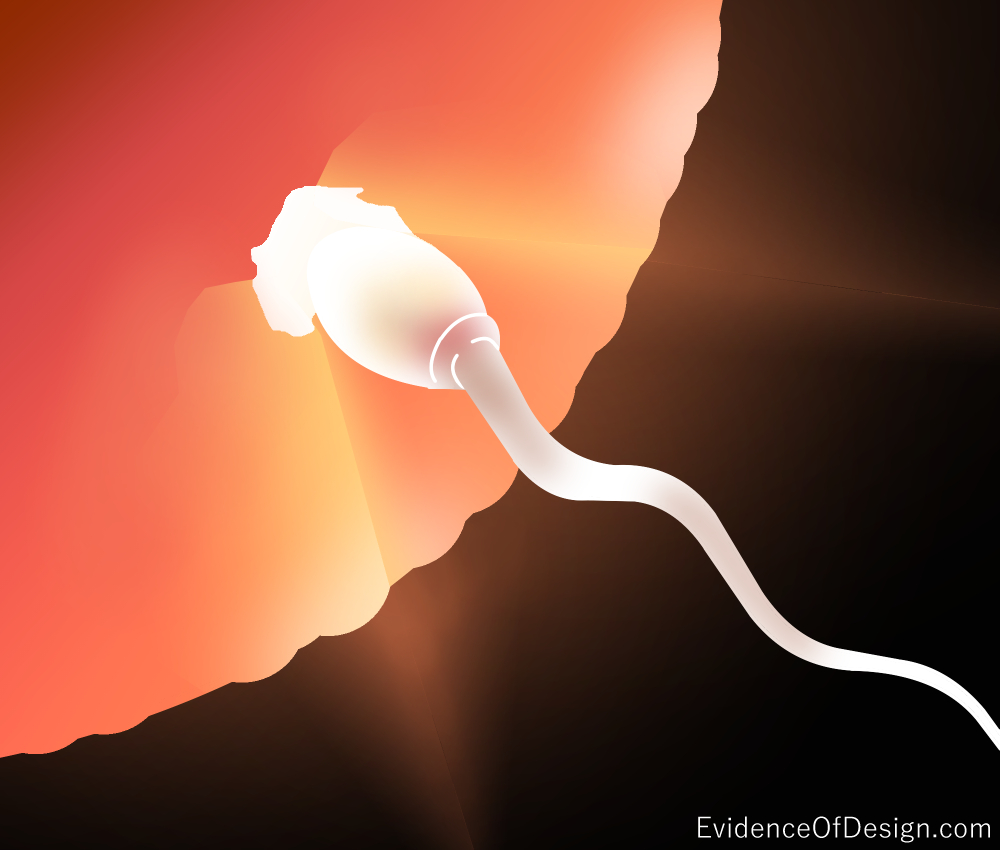 “Sperm placed inside a woman find themselves in a very hostile environment, with features that either destroy microscopic entities or block entrance into her body. The normal vaginal environment is very acidic (pH 3.5), which suppresses dangerous bacterial overgrowth but also kills sperm. Fluids produced by the male seminal vesicles are part of the semen and temporarily neutralize (pH 7.5) the acid. The neutral environment then activates the sperm. A thick sticky mucus plug also blocks the small cervical opening into the uterus. However, another product of semen called prostaglandins causes this mucus to become more liquid-like. Not coincidentally, the mucus may also have been made even thinner by an estrogen surge in the woman around the time she ovulates an egg. Now sperm are able to swim through the mucus into the uterus— all the while converting substances in the mucus to energy.”

“The uterus is protected by millions of cells of the woman’s immune system that kill microscopic invaders. This obstacle is overcome by substances in the semen that have local, but very broad spectrum, immunosuppressive effects that blunt her immune response in the area of the semen. This may leave the woman vulnerable to infection, but another substance in semen, ‘seminalplasmin,’ can kill bacteria and has a protective effect.”

“Normally, coordinated movements of mobile hair-like projections called cilia on some cells lining the uterus, coupled with slight rhythmic contractions of the uterus, produce a defensive fluid current that pushes things out of the uterus— which would be impossible for the sperm to swim against. Yet another product of semen after making contact with the uterus causes these coordinated actions of the woman’s uterus to reverse direction and pull the semen and sperm up into the uterus and assist the sperm on its journey.”
“Surprisingly, freshly-deposited sperm are incapable of fertilizing an egg. Many features of the sperm are changed by substances that are made within the female reproductive tract.” So instead, the beginning sperm is used to make way for a different sperm. This one will have its nucleus pulled into the egg and will produce the first cell of a new person.

And, as if this isn’t enough, the author concludes by saying, “Actually, the detail could go far beyond this simple description.”

The point here is, if these interrelationships were not in place from the beginning, the evolution of humans (or any mammals) would stop, the creature would become extinct, and the whole process would have to start anew. It requires too much blind faith to believe all this happened by accident at once. How much easier it is to believe the Lord created us this way in the beginning, as He said He did. (Psalm 139:14)

Not enough for you? View the quick video below to hear more about the Evidence for Reproduction.

Were We Designed? from Institute for Creation Research on Vimeo.

ICR, founded by Dr. Henry Morris, is the genesis organization for creation science. Their books, articles, and visual materials are sound and dependable both scientifically and Biblically. Visit them at www.icr.org.