If you walk through any kind of woods, you might hear a rapid tapping sound nearby. This is most likely the woodpecker, looking for a bite to eat, or making itself a new home.

Most woodpeckers have four toes, two face forward and two face backward. These, along with their short legs and sharp nails make it easier for them to cling to the bark of trees. The stiff tail feathers give support against a tree. Woodpeckers lay 2 – 8 white eggs that hatch in two weeks.  In most of the over 200 species of woodpecker, both parents aid in incubation.

The woodpecker’s straight, chisel-like bill is ideal for digging out holes in trees for nesting and roosting.  The bill is also used for foraging insects, insect eggs, and larva. The bird has bristle-like feathers over its nostrils that help to keep wood chips from being inhaled while digging. 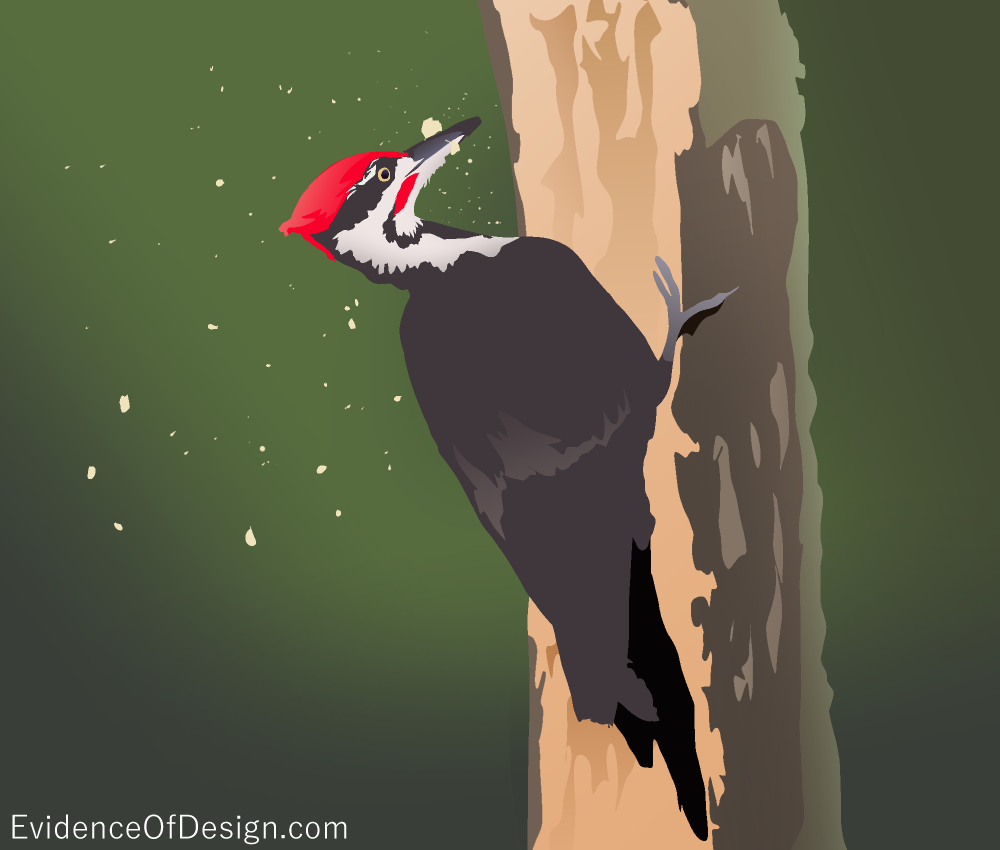 How Fast Can It Hammer?

The remarkable way the woodpecker can hammer its head against a tree without injury has led to the exploration of impact protective systems for people. Studies in the 70’s with high-speed photography revealed that the woodpecker hammers a tree at the rate of 16 or more times a second, or nearly 1,000 blows per minute (twice that of a machine gun), closing its eyes with each impact. It does this with an impact velocity of over 1900 feet per second or 1,300 mph, twice the speed of a bullet. This is 1200 times the force of gravity. While other birds are knocked out simply flying into window glass, the woodpecker can he beat against trees without brain injury? How is this possible?

Why Is There No Brain Damage?

Several reasons are cited. The woodpecker has a relatively small brain that is packed tightly in the skull. The surface is also smooth, unlike human brains, and this spreads the force over a greater surface.

Of key importance is the fact that the woodpecker knows precisely how to strike the tree with its bill. The neck muscles are strong, allowing the bird to strike perfectly straight each time. This allows the force of the impact to be spread directly forward avoiding brain and neck injury (‘diffuse axonal injury’ or DAI) caused by an indirect blow.

We see here yet another example of the anatomy of creatures perfectly suited for their needs. Again too, we find scientists are studying nature to get ideas for technology. But design demands the work of a Designer, doesn’t it? The Bible says His name is the Lord Jesus. (Heb. 1:3)

3 thoughts on “The Woodpecker’s Head”