Though some 200 species of diatoms exist today, an estimated 100,000 species are extinct, known only by their fossil remains. “Diatoms are a widespread group and can be found in the oceans, in freshwater, in soils, and on damp surfaces. . . . They are especially important in oceans, where they are estimated to contribute up to 45% of the total oceanic primary production.” (source below)

Just What Are Diatoms? 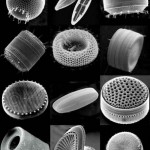 Diatoms are small. The largest ones are only two millimeters in length. These tiny creatures live in a silica shell, similar to a clam, and, when they die, the shell remains. Yet, in spite of their size, Diatomaceous Earth (soil made up entirely of these remaining shells) is so plentiful, mining it is a major industry in various places around the globe. This picture shows a 15 million ton deposit in Queensland, 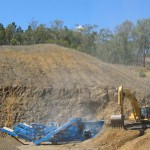 Australia. Deposits are found in both freshwater and saltwater areas. It is a good thing DE is found in abundance for its uses are legion. Here are a few.

What Are The Uses of Diatomaceous Earth?

1. As a safe insecticide, DE is used to get rid of a variety of pests such as fleas, ticks, and bed bugs. The sharp edges of the shells cut the insect’s protective covering. This makes it dry out since DE is such a good absorber. If the bugs eat it, it shreds their insides!

2. This absorbing quality makes DE useful in cleaning up toxic wastes and for things such as facial masks and cat litter. In industry, DE is used in grain storage because it kills pests, absorbs moisture, but doesn’t clump.

3. In 1866, Alfred Nobel found that when nitroglycerin was soaked in diatomaceous earth, it was more stable. This led to the invention of dynamite the next year.

4. Diatomaceous Earth is used extensively in filtering. Celite is a brand name of DE used in swimming pool filters. It is also used in drinking water filtration, fish tanks, even in filtering syrups. DE is used to as a thickener for paint, soap, paper, and detergents.

5. DE has several health benefits. Its qualities of absorbing make it a great colon cleanser. Its hardness works to scrub out the digestive system and restore regularity. More health benefits can be found in the links found below the article.

What Is The Best Explanation For Diatomaceous Earth?

Evolution explains these tons of microscopic shells deposited around the world as the remains of processes that took place over millions of years. A better explanation is that diatoms lived in abundance before the flood and were buried as the worldwide flood waters calmed.

Beauty from The Ashes

Herein is a wonderful lesson about God’s ways. Billions of tiny creatures died in God’s judgment. Yet, now their remains help to make life better. God brings good from judgment, beauty for ashes, joy from mourning (Is. 61:3). God’s ultimate example of this is the salvation He provides through the hateful murder of His Son, Jesus Christ. Do you know Him?