The name ‘elephant’ comes from a Greek word meaning ‘ivory.’ This animal, the largest of all land creatures, lives up to 70 years or longer. The parents must wait 22 months for the birth of their baby but it weighs in at 260 pounds! Eventually, the calf will reach an average of six tons and ten feet tall at the shoulders about the age of 13.

Last time we looked at the amazing cooling mechanism that God gave the elephant, his ears. But people are most fascinated with his nose or trunk.

How Many Muscles Do Elephant Trunks Have?

African elephants are equipped with two fingerlike projections at the tip of their trunk, while Asian elephants have only one (though the latter is not less dexterous because of it). According to biologists, the elephant’s trunk may have over forty thousand individual muscles wrapped around it (some say up to 100,000), making it sensitive enough to pick up a single blade of grass or a peanut, yet strong enough to rip the branches off trees. 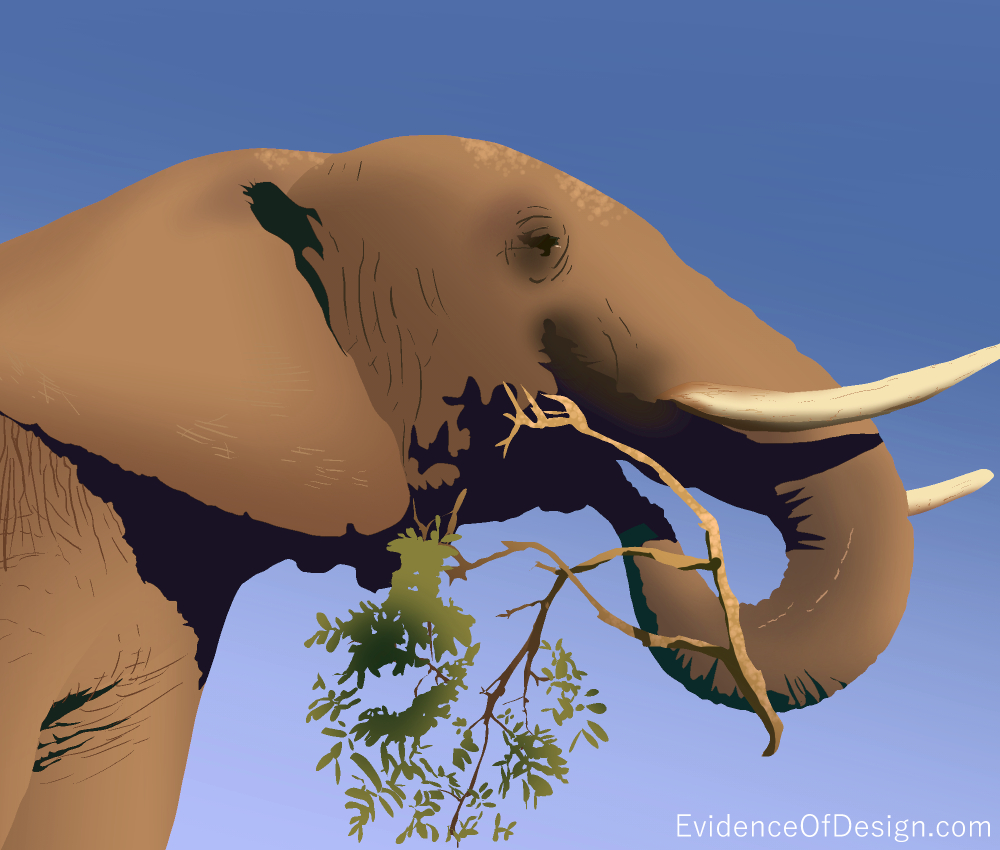 What is The Trunk Used For?

An Elephant is a herbivore that gathers food with its trunk, sometimes shaking the trees or even knocking them down to get what is out of reach. Though the elephant has teeth, it usually tears the food up with its trunk before sticking it into its mouth. The trunk is used for drinking but not like a straw. The elephant sucks up to 15 quarts of water into the two nostrils of its trunk, then squirts the water into its mouth. It can give itself a shower in the same way.

Other uses of the trunk: It is a snorkel when swimming. (Elephants have been known to swim for over six hours nonstop!) It is a hand to greet other elephants by entwining trucks with a friend. The male uses it in courtship. The mother uses it to caress her young. It is a warning flag when raised and a sign of submission when lowered. It is a weapon to protect. It is a finger to wipe its eye or scratch its skin. Elephants have a very acute sense of smell. They use their trunk like a periscope, to locate friends, enemies, and food. There are many other fascinating facts about these pachyderms, their eyes, feet, tusks, skin, memory, just waiting to be discovered.

About the time of our Revolutionary War, a French naturalist named Jean-Baptiste Pierre Antoine de Monet, Chevalier de Lamarck, (or Lamarck for short) popularized a theory that evolution occurred by acquired characteristics being inherited. So, for some reason, one elephant in the distant past stretched its nose and its offspring were therefore born with a longer nose. This went on until it had its present appearance.

Not only was Lamarck’s theory thoroughly debunked, but it would never account for the complexity in the trunk’s ability with gross and fine motor skills. We are once again brought to the conclusion that God designed the elephant’s marvelously versatile trunk in the beginning.